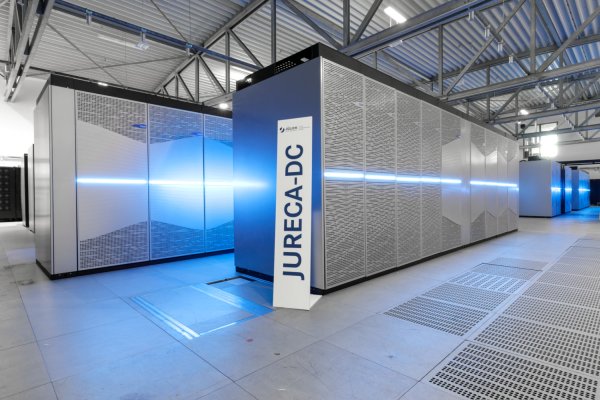 This article was originally published on the JSC website at: https://fz-juelich.de/SharedDocs/Pressemitteilungen/UK/EN/2021/2021-06-23-jureca-dc.html

Jülich, 23 June 2021 – Forschungszentrum Jülich upgraded the modular supercomputer JURECA which is now capable of 23.5 quadrillion computations per second (petaflops). One particular focus of the new system is on processing gigantic volumes of data. This was achieved by installing the module JURECA-DC – “DC” stands for “data-centric” – delivered by the French vendor Atos and operated by the cluster software of the German company ParTec. As of today, this new module alone, with its 18.5 petaflops, is currently among the 30 fastest supercomputers in the world. Just as the modular Jülich supercomputer JUWELS, currently the fastest system in Europe, it will appear on the updated TOP500 list of the world's most powerful computers, which will be announced on 28 June at ISC21 Digital. In addition, the Jülich Storage System was extended via an innovative flash memory system JUST-IME by HPE and DDN, which several Jülich supercomputers will benefit from.

The amount of data that needs to be processed is constantly exponentially increasing, in science as in industry. One example involves analyses in climate research, for example new techniques of data assimilation that allow for more precise predictions of the progress of climate change. The method involves linking data from computer simulations to real measurement data. Another example is approaches using deep learning, which aim to quickly extract patterns from gigantic data sets for example for forecasts of storms and heavy rain.

The process of replacing and expanding the infrastructure at the Jülich Supercomputing Centre (JSC) takes this development towards data-driven approaches into account and enables researchers to process larger amounts of data than ever before. With the JURECA-DC module and the new flash memory system from HPE and DDN for the JUST central storage cluster, two new systems are going into operation that are tailored to accelerate the processing of data and generate knowledge from huge amounts of data.

broad range of applications, and a booster module for codes that can be computed very efficiently on a large number of processors in parallel. While the cluster module has now been replaced, the booster module, which was installed in 2017, will continue to operate.

The new cluster module JURECA DC is supplied by Atos and is based on the Sequana XH2000 series. It consists of a total of 768 compute nodes, equipped with two AMD EPYC Rome CPUs with 64 cores and 512 GB to 1 TB of main memory. Thus, each individual compute node is equipped with a working memory that is equivalent in size to that of a whole hard drive in a conventional PC. An innovative new flash memory system is also installed as an additional source of memory that can be used to accelerate data-intensive applications – similarly to a solid state disk in a notebook or PC. In a joint project Forschungszentrum Jülich, Atos, and ParTec are working on progressively further optimizing the system in its early production phase.

The JURECA-DC module was procured as part of the PPI4HPC project, in which computing centres from four European countries have united to purchase new, innovative supercomputer systems through a joint procedure – for the first time at the European level. The EU is supporting the process of Public Procurement of Innovative Solutions (PPI) by assuming 35 % of the costs that are incurred. Therefore, part of the computer time will be made available for European scientists. Participating in PPI4HPC along with the JSC are the BSC in Spain, GENCI/CEA in France and CINECA in Italy.

With the JUST-IME flash memory system, Jülich’s central storage cluster JUST is getting a new high-performance storage sub-system that is also capable of accelerating the analysis of data and machine learning. The module was supplied by Hewlett Packard Enterprise and DDN and is connected to the supercomputers JUWELS, JURECA, and JUSUF. Together, thanks to the “Infinite Memory Engine” technology from DDN, they achieve a bandwidth of over 2 TB/s – equivalent to roughly twice the bandwidth of the transatlantic cable TAT-14 that has connected the USA and Germany since 2001.

The storage sub-system was procured as part of the Fenix e-infrastructure within the scope of the EU project ICEI, similarly to the supercomputer JUSUF which was installed in 2020. This infrastructure is jointly operated by the large European supercomputing centres BSC in Spain, CEA in France, JSC in Germany, CSCS in Switzerland and CINECA in Italy.