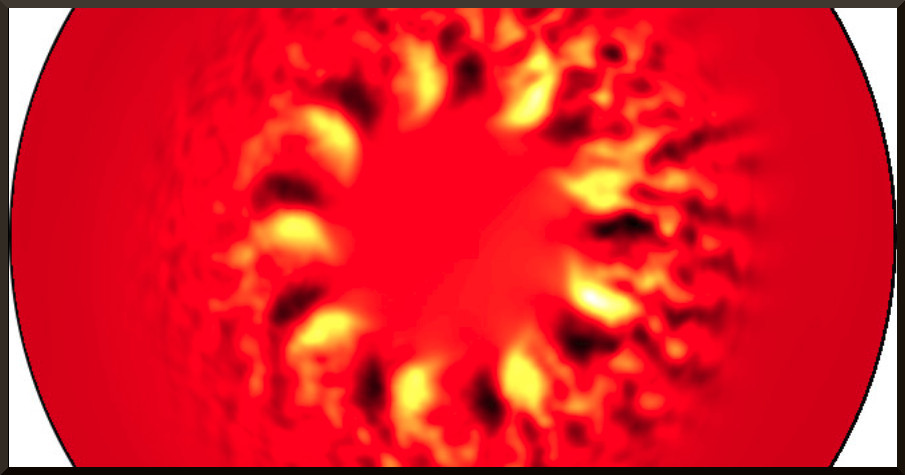 In collaboration with A. Bottino, T. Hayward-Schneider, E. Lanti, A. Mishchenko, N. Ohana, L. Villard and the ORB5 team

One of the open issues in the path to controlled nuclear fusion with magnetic confinement, is the anomalous transport of energy and particles from the tokamak core to the edge. This transport is due to the turbulence formed in the plasma by the nonlinear interaction of a sea of microinstabilities created by the density and temperature gradients. Due to this unwanted transport, it is more difficult to achieve the desired high temperatures in the plasma core, and ignite the nuclear fusion. External heating mechanisms are used to increase the temperature in the core. These mechanisms produce suprathermal particles, named here energetic particles, which are supposed to thermalize and give their energy to the bulk plasma. Before the thermalization, energetic particles can excite electromagnetic macroscopic instabilities like Alfvén modes.

Microscopic turbulence and macroscopic Alfvén modes have been studied mostly separately in the past, due to the technological boundaries limiting selfconsistent global numerical simulations. More recently, thanks to efficient numerical schemes and more powerful supercomputers, we have acquired the capability of investigating the interaction of these different scales in the same simulation. What we have seen is that a complex nonlinear behavior characterizes present day tokamak plasmas, and it is expected to characterize even more the burning plasmas of fusion reactors.

In the last 4 years, global particle-in-cell simulations have been performed within the OrbZONE project, investigating this problem. The numerical tool we have adopted was the gyrokinetic particle-in-cell code ORB5. ORB5 was originally developed for electrostatic turbulence studies and has been then extended to its multi-species electromagnetic version [1]. These simulations have initially been performed in Marconi. An important step forward has been made with Marconi100, whose acquisition was supported by the PPI4HPC project. ORB5 was enabled for GPUs in 2019 [2] and then ported to Marconi100 [3], making these heavy numerical simulations finally affordable.

The first global simulations of Alfvén modes and turbulence with ORB5 have been obtained in a simplified configuration with circular concentric magnetic flux surfaces, and a small inverse aspect ratio. They have shown that both macroscopic Alfvén modes and microturbulence modes can efficiently generate and nonlinearly interact with meso-scale zonal (i.e. axisymmetric) flows [4]. Moreover, the heat flux carried by Alfvén modes has been quantified and the consequent flattening of the temperature profiles has been observed [5]. Regimes with larger plasma pressure have also been investigated in the framework of a PRACE project [6], showing the capability of moving more towards experimentally relevant plasmas. With this proof of principle achieved, an important step towards our ultimate goal has been made, namely the theoretical understanding and prediction of the complex behavior of plasmas in present-day tokamaks and future reactors.