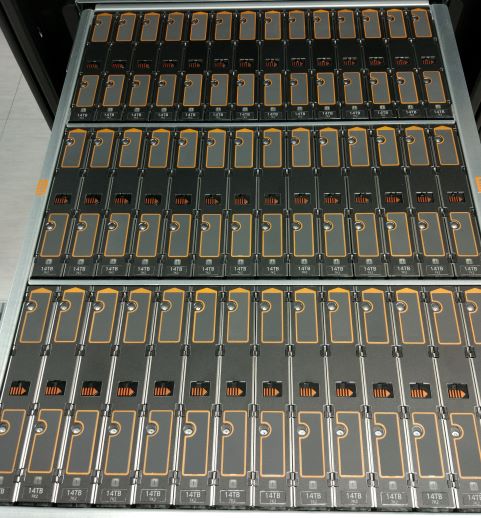 This article was originally published on the BSC website at: https://www.bsc.es/news/bsc-news/bsc-acquires-innovative-technology-optimised-storage-and-data-analysis

Thanks to the public procurement of innovation for HPC by PPI4HPC (Public Procurement of Innovations for High Performance Computing), the Barcelona Supercomputing Center (BSC) will provide a new infrastructure, which allows for higher data storage and data analysis capacity.

The proposed infrastructure includes a disk tier built on all-flash technology and spinning disk drives. It changes the way underlying physical drives are managed, accessed and rebuilt in case of failures in order to minimise the impact to the scientific applications. It is a High-Performance Analytics compute infrastructure to run data analytics operations with the latest Power microprocessors and NVMe PCIe local storage to accelerate the workloads.

The disk tier is completed with a tape tier that allows to integrate tape cartridges into a single file space or file system, allowing the BSC to build a large storage infrastructure optimising footprint, power consumption and cost. The proposed solution architecture comprises a storage infrastructure that is able to scale to more than 100 Petabytes as a unique file space or file system.

In the PPI4HPC project, the BSC, along with a group of leading European partners (CEA, CINECA, GENCI, JUELICH) opted for the execution of a joint Public Procurement of Innovative Solutions for the first time in the HPC sector. With co-funding from the European Commission, the project helped to significantly enhance the planned pre-exascale HPC infrastructure from 2019, and set an example for joint European investments in the future.

“With this new facility, the BSC increases its storage capacities and users will be able to increase the data analytics capacity with better performance”, says Sergi Girona, BSC Operations Director.

This new infrastructure has been installed in the data center basement of the Torre Girona building at the BSC premises, and it is currently in the acceptance and pre-production phases. The innovative technology replaces an old archive infrastructure, which was acquired by the BSC in 2013.

Similarly to the old infrastructure, this technology will be used to provide services of storage of scientific data and data analytics. Data storage and analytics services will be part of the EOSC Hub, and are oriented for and will be exploited by HPC users, such as the Spanish Supercomputing Network (RES), projects that have PRACE allocation in the BSC, as well as scientific communities such as the Human Brain Project (HBP), Pasqual Maragall Foundation, Novel Materials Discovery Laboratory CoE (NOMAD), the European Space Agency’s Gaia mission (GAIA) and the ioChem-BD Computational Chemistry repository.